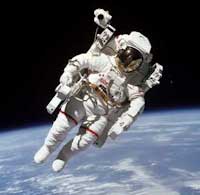 The United States Astronaut Hall of Fame, located just south of Titusville, Florida, honoured American astronauts and featured the world's largest collection of their personal memorabilia, focusing on those astronauts who have been inducted into the Hall; as well as Sigma 7, the fifth manned Mercury spacecraft. Along with Sigma 7, outside of the building stands a full-scale replica of Space Shuttle Inspiration where visitors can enter the inside and view. It is operated as part of the Kennedy Space Center Visitor Complex, 6 miles (9.7 km) to the east on Merritt Island.

In the 1980s, the six then-surviving Mercury Seven astronauts conceived of establishing a place where US space travellers could be remembered and honoured, along the lines of halls of fame for other fields. The Mercury Seven Foundation and Astronaut Scholarship Foundation were formed and have a role in the current operations of the Hall of Fame. The foundation's first executive director was former Associated Press space reporter Howard Benedict.

The Astronaut Hall of Fame was opened on October 29, 1990, by the U.S. Space Camp Foundation, which was the first owner of the facility. It was located next to the Florida branch of Space Camp. The Hall of Fame closed for several months in 2002 when U.S. Space Camp Foundation's creditors foreclosed on the property due to low attendance and mounting debt. In September of that year, an auction was held and the property was purchased by Delaware North Park Services on behalf of NASA and the property was added to the Kennedy Space Center Visitor Complex. The Hall of Fame re-opened December 14, 2002.

Inductees into the Hall of Fame are selected by a blue ribbon committee of former NASA officials and flight controllers, historians, journalists, and other space authorities based on their accomplishments in space or their contributions to the advancement of space exploration. Except for 2002, inductions have been held every year since 2001.

Thirteen astronauts from the Gemini and Apollo programs were inducted in 1993. This class included the first and last humans to walk on the Moon, Neil Armstrong and Eugene Cernan; Ed White, the first American to walk in space (also killed in the Apollo 1 accident); Jim Lovell, commander of the famously near-tragic Apollo 13; and John Young, whose six flights included a moonwalk and command of the first Space Shuttle mission.

The third class was inducted in 1997 and consisted of the 24 additional Gemini, Apollo, and Skylab astronauts. Notable members of the class were Roger Chaffee, the third astronaut killed in the Apollo 1 fire and the only unflown astronaut in the Hall; Harrison Schmitt, the first scientist and next-to-last person to walk on the Moon; and Jack Swigert and Fred Haise, the Apollo 13 crewmembers not previously inducted.

Over two dozen astronauts from the Space Shuttle program have been inducted since 2001. Among these are Sally Ride, the first American woman in space; Story Musgrave, who flew six missions in the 1980s and 90s; and Francis Scobee, commander of the ill-fated final Challenger mission.

The Hall of Heroes is composed of tributes to the inductees. Among the Hall of Fame's displays is Sigma 7, the Mercury spacecraft piloted by Wally Schirra which orbited the Earth six times in 1962. An Astronaut Adventure room includes simulators for use by children.

The Hall of Fame closed to the public on November 2, 2015 and relocated in 2016 at the Kennedy Space Center Visitor Complex.